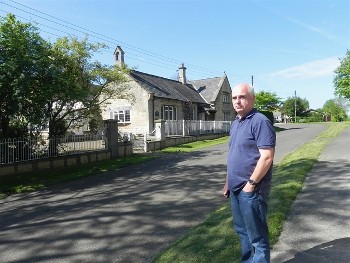 Author Dave Bristow's additional sense of a lucky escape first led him to research and record one of the most poignant untold stories of WWll.

If a Liberator aircraft involved in a mid-air collision over Carlton Scroop had not narrowly missed the village school, his father and other pupils would have been killed - and Dave would not be here today.

His is a story of battle hardened American aircrew from the 14th and 53rd Squadrons based at Barkston Heath. They had the major airborne offensives of 1944 behind them and were on conversion training to fuel tanker aircraft by B-24 bomber pilots who had completed their tours and were enjoying the imminent prospect of a return home .

'What Happened To You, Lazy Lou', is the tale of how the fates of 9th USAAF Transport crews and bomber pilots of the mighty 8th Air Force ended in tragedy mid-afternoon on December 18, 1944.

Eye witness accounts of the collision on December 18, 1944, both from the ground and surviving aircrew, combine with images of the downed aircraft to graphic effect.

Lazy Lou, immortalised as an Airfix model with saucy nose art and even prompting a line of greetings cards, lost two engines in the collision.

The crippled aircraft, piloted by the fresh-faced 14th Squadron boss Lt Col Lewis Frederick , almost made it to RAF Cranwell. Instead it crashed just short of the airfield, killing the Colonel and his flight engineer Paul G Sattler, just days before his promotion to Major.

Mortally wounded was the Colonel's dog Major Jerry - a forces canine pin-up with hundreds of flying hours to his name.

Their aircraft had been hit by a C-109 fuel transport - a converted B-24 bomber flown by a 20 year old pilot 1st Lt Dan Wolf who had survived the annihilation of the 492nd Bomb Group. The C-109 crashed straight away and exploded, with no survivors.

The collision remains a mystery. How could a routine training flight from RAF Barkston Heath go so wrong and was anyone to blame?

Was one aircraft 'fooling around' as eyewitness retired farm worker Gordon Brown suggested at the time, describing how 'one appeared to be rocking its wings'.

It's a theory perhaps supported by the words of an American survivor from Lazy Lou instructor 1st Lt Ernest Haar, whose account read: "All of a sudden there was Dan Wolf in the pilot's seat of the C-109 flying formation on our airplane. We were at an altitude of 300 feet and this was ridiculous.

"We started our turnout and could not see Wolf. Then we heard the crump and it became apparent that we had lost the propellers on numbers 1 & 2 engines."

Both aircraft had been recently delivered to Barkston Heath. The C-109 was a new aircraft. By contrast, Lazy Lou was an old war horse who had flown the circuitous 12-day southern route from the States to England, had defied attrition rate statistics, completed nearly two combat tours and was now used for training.

Accounts suggest that Lt Col Frederick's last minute action to avoid a house near Cranwell probably contributed to the aircraft stalling and crashing.

Dave explained. "This incident was not mentioned in any of the crash site reference sites and somehow, because of how it could have affected our family, it felt personal.

"I have always been an aviation enthusiast with a fascination for WWll aircraft and my bedroom was full of model aeroplanes. When Dad first told me this story I have to confess as a young boy I was rather disappointed that it wasn't a Lancaster, my favourite.

"Then it became apparent that it wasn't mentioned in crash site reference books and I felt strongly that the crews should be commemorated in some way."

He researched the collision, close to where the iconic Cold War communications tower now dominates the village landscape, and tracked the background and military careers of survivors and men lost.

His own grandmother's farm diary of the day records the words 'Liberators collided and crashed in R Cragg's field', followed by 'Reg went to Sleaford re: wood permit' - a sign no doubt of how used local people had got to the great aircraft overhead on a daily basis.

Dave's postscript to the lost crews reads: "It was the week before Christmas and they were thousands of miles from home. I imagined they might have breakfasted together, beginning to believe the war was ending and they would be back for coffee and doughnuts in an hour or so.

Dave Bristow has now completed his research and his book has been published.