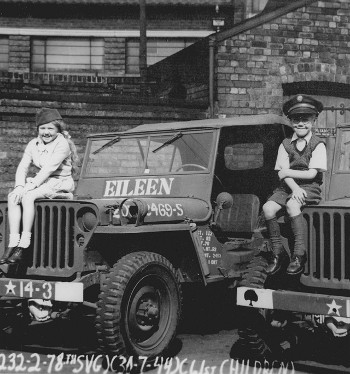 The result was not one 'adoption' of an eligible British child, but two, records the squadron war diary.

"In this the Fourteenth stands alone, every other Squadron in the Group, including HQ Squadron, raised money enough to adopt one British child. But the Fourteenth now has a small boy and his sister calling it Uncle."

The diary simply has the childrens' Christian names and ages, eight year old Ronald and his ten year old sister Eileen who arrived at Barkston Heath on 29 July 1944 - Eileen's birthday - to spend the next day as squadron guests.

"They were feted at a special dinner, they were guests on a neighbouring farm, they posed for photographers, including Larry O'Reilly of American Pathe News and they had the run of the base," a diary extract confirms.

"Ronald was made an honorary captain in the Air Force and claims the distinction of being the only soldier on the base to monkey with the Colonel's should eagles and still stand in good stead.

The story made the front page in the Grantham Journal and the Fourteenth is reported as having bought 100 copies.