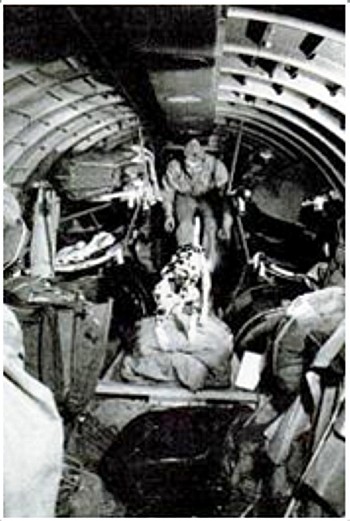 Father and son Terry and Mark Musson have spent many hours researching the airfield's past and it was Terry Musson's probing into a particular service number - Captain Jerry 0-13529713Z-K9, Hq 61st TC Op - that revealed that there was no such officer. Instead he was an American officer's dog, and one that clearly enjoyed promotion from Captain to his later title of Major!

Indeed Major Jerry was no ordinary dog, but an international globe-trotting Forces pin-up, pictured in Life Magazine in September 1943 in Brazil with owner Colonel Frederick and described as 'the most popular mascot to pass through Natal', before the pair returned to North Africa.

Jerry was then 18 months old, so it's possible that Frederick acquired the pup during his flight training after enlisting in late 1941 following graduation

The caption confirmed that Jerry already had over 600 hours flying time, had been to Africa and 'all over the country' so he almost certainly crossed the Atlantic to Africa with his owner in May 1943 on the testing 12-day trip to England - and the Lincolnshire airfield that was to become the last home for both.

A Restricted 'Special Orders' memo from HQ Sixty First Troop Carrier Group says much about his fellow crewmen's determination to keep the dog on board, and the sense of humour that pervaded their deadly serious objectives. It reads:

WP without delay RUAT to the CO therefore for dy. 201 File, allied records and full field equipment, including bushes and posts, will fully accompany officer

By order of Lieutenant Colonel Mitchell