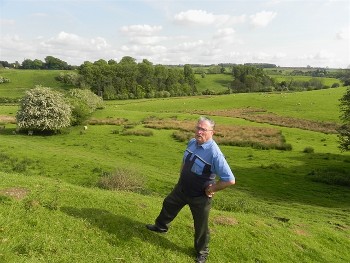 Not one but three Lancaster bombers fell near his home in the hitherto quiet Vale of Belvoir village of Eaton; none more dramatic than Lancaster R5726 that exploded in mid-air on April 4, 1944, and crashed near the village of Branston.

It happened as Roger and his school mates were coming out of primary school. Like any curious schoolboys, they ran over as fast as they could to the crash site!

"We didn't even look up as there were aircraft over us all the time. But then there was a big bang. I didn't see the explosion, but when I looked into the sky I saw debris still going up into the air."

Roger and his schoolmates ran over the fields towards Branston, coming across the fuselage first and seeing much of the remaining aircraft on fire.

"As we climbed over the fence we saw the main part of the aircraft in the hollow and bits of plane scattered all over. Part of the rear gunners turret was sticking up at the back of the spinney with the gunner dead, half in and half out.

"We then got sent away and not allowed anywhere near. There were still bullets flying off and I remember three parachutes going up and down with no-one attached.

"The next day we saw two engines sunk three or four feet into the ground. They are still buried there as far as I know. The bodies had gone then but we could see their imprints in the ground"

A sub-aqua group recovered a wing tip from nearby Knipton reservoir in the 70's and it's displayed in Newark Air Museum.

It was not Roger's first acquaintance with death and destruction from the skies. That came courtesy of the first Lancaster that crashed close to Eaton.

"It crashed at night and I walked up there with my mother the next morning. I remember a Canadian chap lying dead close to the road. It had hit the old ironstone workings and been partly contained by them or it could have hit the village."

His childhood memories also include 'White City' as they called it, a searchlight battery near his home to guide aircraft home, and collecting bits of Perspex windows from downed aircraft cockpits to make rings. "We used to burn a hole with a poker"

And did any of those experiences disturb him or his friends? Roger dismissed the idea. "No, I don't think any of us were badly affected in an way. Aircraft crashes were just one of those things in those days."