The South Kesteven District Council vehicle has taken cancer charities' call to 'Wear It Pink' to another level, with prominent health check adverts on each side. It will go into service immediately.

It's a colourful demonstration of the Council's continuing support for the cause and, specifically, Breast Friends Grantham, a support group formed by breast cancer survivor and SKDC employee Rachael Bradley.

The group, open to men and women, now has 120 members from across the district.

Cllr Kelham Cooke, Leader of South Kesteven District Council, said: "We are proud to be providing a highly unusual vehicle to take vitally important messages right across the district.

"Our new freighter is the ultimate in wearing it pink, all year round, and it carries advice which can literally save lives."

The Council has worked closely with its lorry supplier, Dennis Eagle, who were delighted to support such a good cause with a pink paint job on a freighter already on order for the refuse collection fleet.

The new vehicle was always scheduled for delivery to join the fleet, so there was no extra cost to the council for either the lorry or the pink paintwork.

Dennis Eagle has also produced a time lapse video showing how the lorry was built, painted, branded and delivered:

Rachael said: "I am absolutely over the moon to think that we will have this lorry spreading such a vital message day in and day out, and I am so grateful to the Council. It's amazing, and it's going to make a real difference.

"I know first-hand what it's like to suffer this dreadful disease, and I have lost friends and family to it. The more we can do to raise awareness of what to look for, the better our chances of helping others."

TV personality Julia Bradbury, herself a breast cancer sufferer, has sent Rachael a handwritten good-wishes note along with a 'Boots for Boobs' t-shirt which she designed. 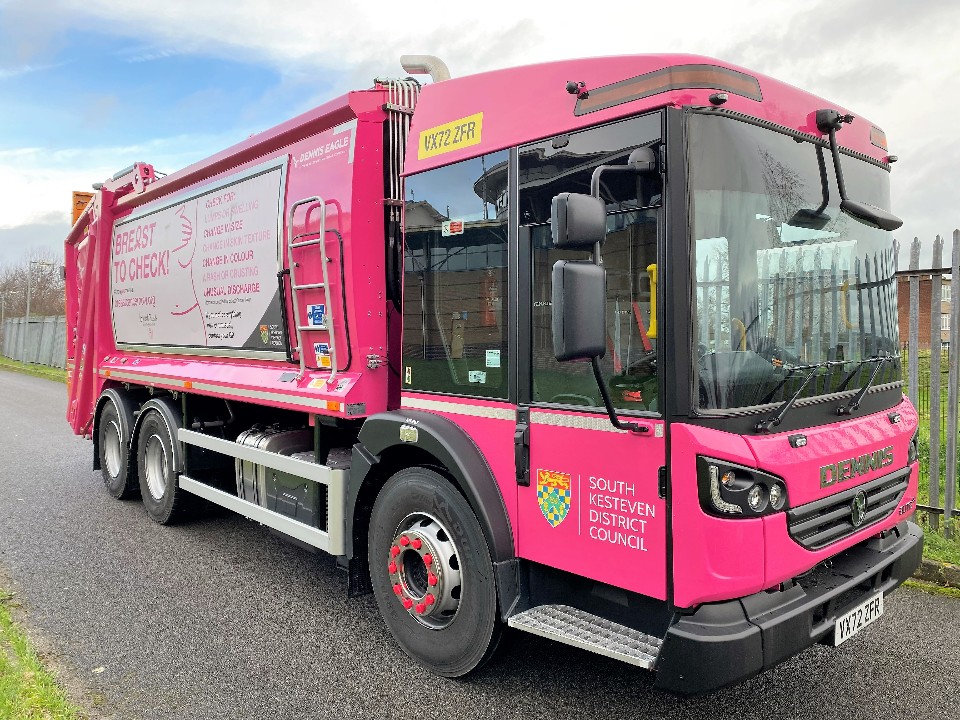 Clair Raybould, Director for System Delivery and Lead for Cancer at NHS Lincolnshire Integrated Care Board, said: "What a great way to promote the "Wear it Pink" campaign in the South Kesteven District with something as impactful as this highly visible refuse lorry. I am sure that the important messages relating to Breast Cancer will be seen by many people not only on Wear It Pink Day but also during Breast Cancer Awareness month this October."

"It's so important to be breast aware and get to know 'your normal' and understand what's new or different for you. While most breast changes — including breast lumps — are not cancer, it's important to get any new or unusual changes checked by your GP. On the occasions it is breast cancer, the sooner it's diagnosed, the better the chances of treatment being successful.

"Checking your breasts only takes a few minutes. It could be while getting dressed, showering or putting on moisturiser. Check your whole breast area, armpits and up to your collarbone (upper chest) for changes. There's no special technique — it's as simple as TLC: Touch, Look, Check."

Matt Horwell, Dennis Eagle Regional Sales Manager, said: "We were delighted to help South Kesteven District Council get behind this campaign. The vehicle definitely stands out and it will certainly help draw attention to this very important cause. We wish Rachael and the rest of her group all the very best in their efforts."

Diagnosed with breast cancer at the start of the Covid pandemic in March 2020, Rachael Bradley is now in remission and works tirelessly to help other sufferers.

Her story and the loneliness of battling cancer during a global pandemic - 18 months of treatment, surgery (where she was the last person in theatre for three months), chemotherapy, radiotherapy and hormone treatment - are captured in an emotional video:

Rachael's work to help others through Breast Friends Grantham led to her role as a batonbearer in the Queen's Baton Relay through Grantham before last summer's 2022 Commonwealth Games.

Some of the facts and figures: